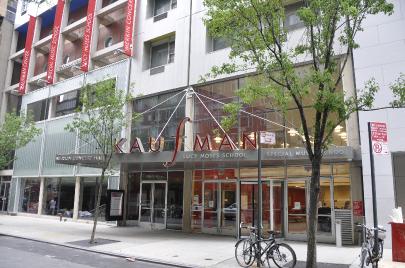 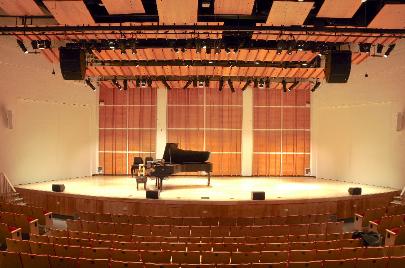 Four 8xti co-axial front fills make sure we give the front row as good a show as everyone else, and that's that. The ARC is an active 2-way box with a 15" low frequency driver. Our system has six ARCs in it, and the 6- 15" drivers this brings to the party generates VERY convincing low-mid power. Re-use of existing 15" subs allows the Hall to deploy two ground-based loudspeakers to extend the system's range down to about 35Hz.

Acme may not be responsible for L'Acoustics' 'sideways ARCs' rigging frame, but we have long been proponents of using this wonderful loudspeaker rotated at 90^ from the way the manufacturer originally intended it. In the case of Merkin Hall, this gave us a stereo system built of low profile trios of loudspeaker cabinets that provide 60 h x 66 v of full-range coverage-- which works out to be a pretty otpimal way to address the Auditorium.

Our entree' came via Director of Operations Joe Levy, an old ally from our early days at The New York Shakespeare Festival's summer Delacorte Theatre Seasons. Joe's charge was straightforward-- support the artists without drawing attention to the sound system. We responded with what is in essence, a large-scale audiophile stereo system-- a loudspeaker system that is rich and full at very low levels, but capable of getting loud with elan. Most of all, it provides a uniform experience for the entire audience, and allows performers to work without being overly aware of the presence of a 'sound system'.

Kaufman Center for the Arts