Segerstrom Center for the Arts 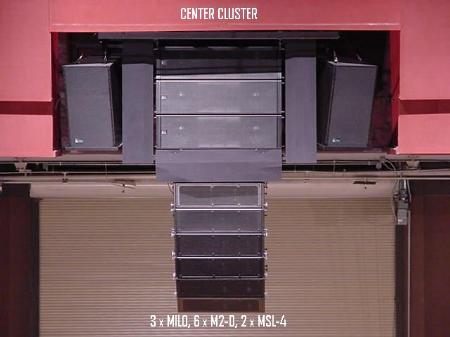 The first sight of Segerstrom Hall has struck unreasoning fear in the hearts of visiting audio engineers for 27 years. The striking asymmetrical seating layout, imposing ceiling geometry and deep overhangs give even seasoned veterans a moment’s pause.

Surprisingly though, this is a great sounding room for many different kinds of music, and served admirably as the home of the Pacific Symphony Orchestra for many Seasons prior to the Opening of the “new” Segerstrom Concert Hall next door.

With a seating capacity of just under 3,000, Segerstrom Hall is an ideal venue for Opera, Broadway Tours, and Comedy & Pop Music Acts.

A typical center array for a symmetrical Hall would be expected to provide constant horizontal sound pressure level [SPL] and variable vertical SPL to compensate for changes in throw distance from the front to the back of the Hall. This room called for variable SPL control in both axes.

API’s array design divided the room into three vertical zones, the upper and lower addressed by line arrays and the middle level covered by a pair of long throw trapezoidal cabinets with slightly different Horizontal & Vertical orientation, driven at different levels to compensate for the variance in throw distances to the seating areas covered by each cabinet.

The main loudspeaker system is augmented by more than thirty delay fills, addressing the coverage shortfalls caused by the numerous architectural overhangs in the Hall.

As with NJPAC, enthusiastic Audience and Artist response to the new Center Loudspeaker System resulted in a commission to provide Stereo Arrays to complete the system and eliminate rentals for all but the loudest Concerts.