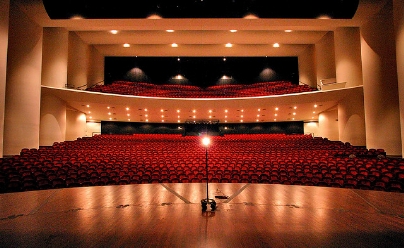 A classic “Difficult” Room (by our definition anyway), The Great Hall has a lengthy mid-frequency reverberation time owing to hard interior surfaces including large brick entrance vestibules outside of the white columns shown in the photos. The vestibules add at least 20% to the cubic volume of the Hall and are VERY reflective.

Excellent for Symphony, Opera and Choral works, the Great Hall had a reputation as a bit of a masochist’s paradise for sound engineers as it seemed capable of, impossibly, reflecting more off-axis incoherent sound energy into the auditorium than was generated by the performers and sound system combined.

As with NJPAC & Segerstrom, touring musicals suffered most as vocal intelligibility seemed ‘an impossible dream.’ MSU called Artec Consultants Inc for help, and Artec asked Acme to join them in coming up with a solution. We concluded that a dedicated Center Vocal System anchored by a proscenium Line Array, and abetted by a couple of delay loudspeakers for the outer reaches of the wide Balcony was the key for visiting shows as a supplement to their traveling loudspeaker towers. 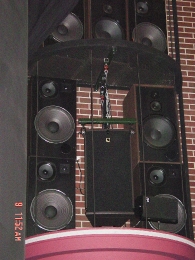 Faithful to our penchant for choosing boxes based on fidelity and coverage characteristics without regard to product line, we ended up with L’Acoustics, d&b Audiotechnik and Meyer loudspeakers all in the same, rather small, rig. The primary Array, modelled in Soundvision, consists of sixteen dV-DOSC line array cabinets, flanked by a pair of Meyer USW-P Subs.

To help ensure consistent coverage at the extreme sides of the Main Floor, we employed an L’Acoustics ARC on each side of the Proscenium, concealed within an scrim-covered 'Electronic Pipe Organ' loudspeaker enclosure. A pair of Meyer UPA-2Ps serve the same function in the Balcony, providing ‘just enough’ high frequency coverage to fill in where the dV-DOSC Center Array begins to drop off.

Six d&b E3 Apron Fills and a single E3 Near Fill in each Organ Loudspeaker Enclosure complete the ‘Vocal System.‘

We installed the loudspeakers, Amps and XTA Signal Processors in noise-isolated equipment racks above the proscenium near the main Array-- then spent two days optimizing with the SIM Rig and a third performing listening tests and applying subjective tweaks.

Response to the new system was overwhelmingly enthusiastic, bringing intelligibility complaints to a screeching halt, and every Touring Musical to visit the Hall since has used the House Vocal System.

Acme was immediately asked to provide a new design for a complete sound system, to help improve performance quality for in-house Musicals, Concerts, Commencement speeches and other spoken word events presented in The Great Hall.

The Center asked us to provide removable side loudspeaker arrays to preserve the clean lines of the Hall during acoustic events. Borrowing from the Broadway model, Acme designed portable Left & Right loudspeaker towers containing Meyer MSL4, CQ2, CQ1 and 650P loudspeakers. The Towers break down into 7’ tall modules to allow easy transport through backstage hallways. Each module is wheeled onstage and stacked in place using chain hoists.